“Hello Katy” star Katy Bellotte has over 280,000 subscribers and more than 21 million views on her weekly YouTube channel. Her fans comment from all over the world. She is not your typical first-year student at Elon University. 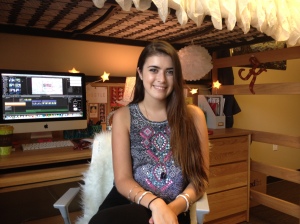 Katy Bellotte, a member of the Elon University class of 2018, also is a YouTube star with over 200,000 subscribers and 21 million video views. Photo by Miranda Siwak.

“I like to call it a fashion-beauty-lifestyle channel,” Bellotte said. “It’s whatever I decide to film. It really depends, and I listen to the readers’ comments and what they want to see. My channel has definitely evolved into something all over the map.”

“In eighth grade I decided I might be good at doing makeup,” Bellotte said. “So I decided to film myself and somehow it has grown into something I cannot even begin to explain. If I went back and told my eighth grade self I would be this successful this early in my life, I would not have believed it.” 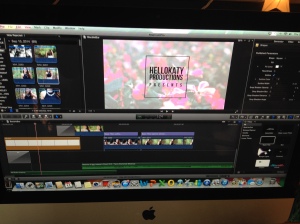 Katy Bellotte uses Final Cut Pro to edit her “HelloKaty” videos, which are uploaded every Friday at 8 p.m. Photo by Miranda Siwak.

Bellotte prefers not to plan anything ahead of time when shooting her videos. This is a way to make it seem more organic and real. It takes her around an hour to set up and shoot each video, three to five hours of editing. Uploading can take up to an hour. Her videos go live at 8 p.m. every Friday.

“I pride myself on editing, that’s my favorite part of the whole video process,” she said. “With editing, I’ve never read a single manual or seen a single tutorial. It’s just been trial and error.” 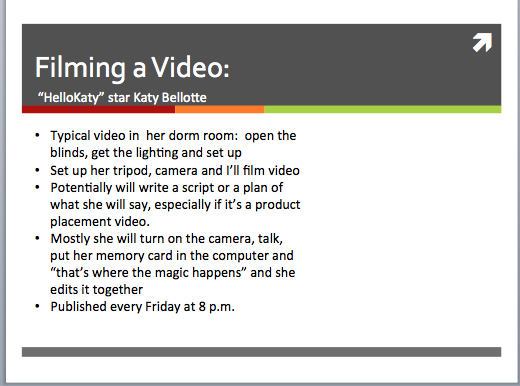 She has enlisted her Elon friends to help shoot her videos. Bellotte adds how her friends, both from home and school, have been hugely influential in helping her film videos and come up with ideas.

“I have given Katy advice about fonts and colors, and I shot her BaubleBar promotional video,” first-year student at Elon University Allegra Berger said. “I love shooting with Katy because we always have such a silly time, whether it’s getting chased by ducks, voyaging into the Danieley forest or catching the perfect sunlight.”

Bellotte plans to major in Strategic Communications. She is currently enrolled in the introductory course in the Communications major, Communications in a Global Age. She said she is applying what she’s learning to running her business and her YouTube brand. She expects to continue to apply classroom lessons to her video business and a future career in the public relations industry.

“I really love this as a hobby,” she said. “I feel that if this becomes a 100 percent career for me and I spend all of my time making videos, it will become less awesome and less magical to me. I don’t think I’ll take this into my future 100 percent, but I do hope I can carry it through in my life.”

Bellotte said she is inspired to generate video from her environment and the people around her. For instance, the different fashion trends around campus that she spotted and used in a college fashion video.

“I generally just want to make people’s lives easier. All I want to do is make people smile and feel loved. When I’m filming, I try to tell my viewers that I’m here for them: I will answer their advice questions and tell them how to put on eyeliner.” — Katy Bellotte

She meets her fans everywhere. She prefers to call them “subscribers” or “viewers,” citing an awkwardness she feels with being equated with celebrites who have fans. Since arriving at Elon, she has met at least 10 students who watch her videos.

“I can’t imagine my work changing or impacting anyone’s lives at all,” Bellotte said. “It’s absolutely mind-boggling to me. Really, I just love the viewers. When they come up to talk to me, it’s really great.”

Comments on her YouTube videos originate from around the world. She readily interacts with viewers on social media sites like Twitter and Instagram. She met fans from all over the world last summer at the BeautyCon convention for makeup artists and vloggers in Los Angeles.

“It’s crazy,” Bellotte said. “At BeautyCon, I had this group of girls come up to me from Saudi Arabia and told me how they watch my videos. I was so mind-boggled.” 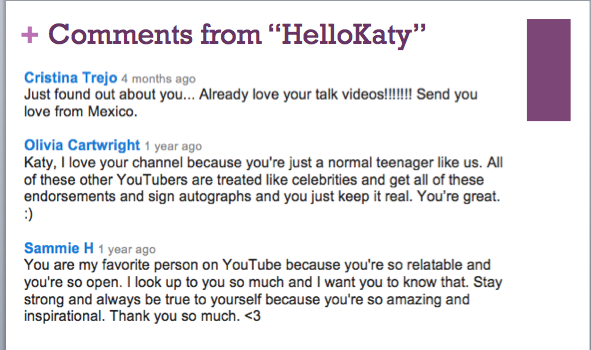 Dealing with the not-so-nice feedback

ANyone who makes their work public also encounters some backlash and controversy, no matter the medium. Bellotte said she tries to remember that all the positive comments people write tend to outweigh the negative ones.

“There are people who just don’t understand what I do,” she said. “It does hurt my feelings, but I will say after five years of this, I’ve definitely developed a thicker skin over time. I try to stay true to what I’m doing and I try to remember that there are many people who support what I do.”

The star of “HelloKaty” says a viral video does not necessarily have to have top-notch production qualities. Popularity tends to depend on the online traffic and marketing. Bellotte said that -by definition- none of her videos have gone viral, but perhaps will someday. She explained that YouTube popularity changes constantly. It’s all based upon what viewers want.She said it can be hard to get to get a big following on YouTube because there are so many channels, creators and different types of content currently.

“Just try to get your name, your stuff out there,” Bellotte said. “But at the same time, stay true to what you want to make.”

Bellotte said that out out the 600 videos she has recorded, her best-viewed are those she classifies as “word vomit” videos; those where she has no script and just talks into the camera. She said her work is evolving and she gets better at offering advice to her viewers through more experience.

Some YouTubers have become minor celebrities today,  participating on “Dancing With the Stars,” shooting a cover story for Seventeen Magazine and shooting a pilot episode of a new E! talk show. Bellotte has had a taste of this, appearing in a commercial for L’Oreal products out in Los Angeles.

“As they said on the Teen Choice Awards, they made the term “Team Internet” viral. YouTubers are just normal people. Now that they are becoming like mini-celebrities it is really crazy to me. I’ve never met a YouTuber who isn’t humble or doesn’t realize that this is not normal. It’s really inspiring and it gives me hope that this will go somewhere for me and for other who are involved with YouTube.” –Katy Bellotte

“Her honesty and passion for what she does came shining through the moment I met her,” Berger said. “I wasn’t surprised to find that she was loved by millions of other people, and in this short time, she has truly become one of my best friends.”

Bellotte said she often wonders what will become of her YouTube channel and videos. Last April she was invited to give a speech at a high school communications conference at Columbia University in New York on interactive media and how it has shaped society.

“I stood in a full convention room, where I was the only speaker under 40 who didn’t have a degree from college already and I gave a 45-minute speech about the Internet,” Bellotte said. “It was really scary, but I got a standing ovation at the end, which was insane. It was one of the best moments of my life.” 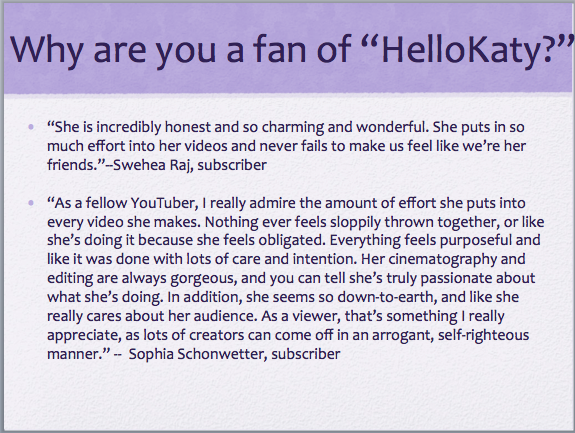 She said how the field of Communications interests her as a future career. She enjoys posting to her “HelloKaty” channel and serving the needs of her subscribers, and hopes she can transition her success to other mediums. She expects to  keep making videos for a long time post-college.

“I hope I can take it with me and always connect with these awesome people,” Bellotte said. “The amount of people I’ve met who have watched my videos is so inspiring to me and I don’t want to lose them.”